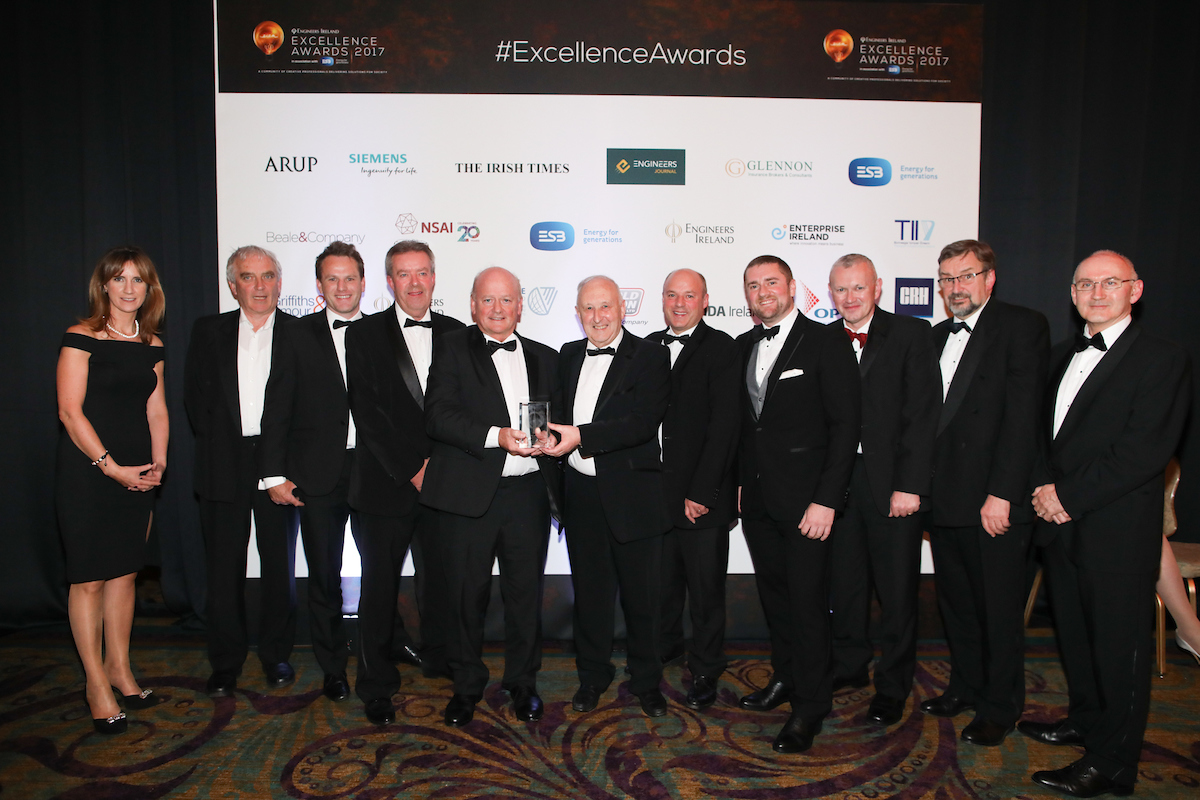 Malachy Walsh and Partners was awarded Engineering Project of the Year 2017 by Engineers Ireland for the Redevelopment of Páirc Uí Chaoimh Stadium, Cork at a Gala Event in the InterContinental Hotel, Dublin on Friday evening 10th of November. This is a prestigious award and was won in the face of stiff competition from six other significant projects in Belfast, Galway and Dublin.

The Firm is delighted to have been the Design Project Manager, Civil, Structural, Mechanical, Electrical, Traffic and Environmental Consultants for this project which employed over five hundred persons at peak. The design team included Scott Tallon Walker (Architect), Michael Barrett Partnership (Quantity Surveyor) and Cunnane Stratton Reynolds, (Planning Consultant). The project was carried out under the direction of the Cork County GAA Board.

The Stadium is located within the unenclosed Marina Park, being developed by Cork City Council and will be the first Stadium in Ireland within a municipal park when the first phase of the park is completed in 2019.

The Stadium has been designed as a floodlit multipurpose venue, suitable for match days and concerts and also as a venue that can accommodate conferences, functions and large meetings on non match days. There are extensive facilities for players and food and drinks are available to spectators at each sector at every level. There is also a second 4G playing pitch that complements the main playing pitch and together they provide an excellent facility for the fourteen inter county teams, clubs, schools and colleges.

The project commenced in February 2012. It went through the planning process including an oral hearing and was ready for the main contractor John Sisk & Son to commence construction on December 7th 2015, subsequent to enabling works that included the demolition of the old stadium and piling of the south and north stands. The first game was held in the redeveloped stadium on Wednesday 19th July, 2017.

Malachy Walsh and Partners is proud to have won this award, the culmination of over 5 years of planning, design and construction supervision of the stadium. This award is testimony to the commitment that was given by everybody involved. Malachy Walsh and Partners is proud to be associated with this new stadium, which provides for a pleasant player and spectator experience at Páirc Uí Chaoimh, on the banks of the River Lee.

This website uses cookies to improve your experience while you navigate through the website. Out of these, the cookies that are categorized as necessary are stored on your browser as they are essential for the working of basic functionalities of the website. We also use third-party cookies that help us analyze and understand how you use this website. These cookies will be stored in your browser only with your consent. You also have the option to opt-out of these cookies. But opting out of some of these cookies may affect your browsing experience.

Any cookies that may not be particularly necessary for the website to function and is used specifically to collect user personal data via analytics, ads, other embedded contents are termed as non-necessary cookies. It is mandatory to procure user consent prior to running these cookies on your website.